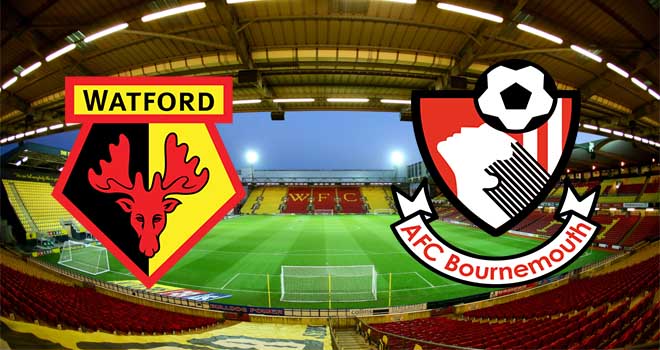 Early chance for Odion Ighalo from Troy Deeney’s flick on. Made a shot from a far post.

Good pressure showing by the Watford squad, as Charlie Daniels is forced into as lashed clearance into the stand, putting Watford on the attack…

Nordin Amrabat plays a fine ball passing to Odion Ighalo’s feet on the edge of the box, and he turns and shoots.But unfortunately his attack was been blocked and Troy Deeney’s follow up can’t still make it However Watford are on top early doors.

Jack Wilshere is taking some time on how to get the ball in the midfield and trying to dictate the play for his temporary side. As of the moment, Bournemouth is a bit scatter that is why they cannot keep the possession for a longer time.

Bournemouth has a free-kick chance but in a dangerous position after Sebastian Prodl handled out Callum Wilson that chases him onto the corner.

Watford is doing excellently at the back, staggering forwards to constraining Bournemouth before they can pass through their third defense. Making them hesitating to move forward.

Etienne Capoue passes the ball to Younes Kaboul but was not able to score the ball flew high up over the bar.

Jose Holebas shoots from the edge of the box after Ighalo Odion hold up the play.

Patient play from Jack Wilshere in midfield before Adam Smith makes the run in behind and Harry Arter looks to challenge him out unfortunately the pass was very way too long.

Simon Francis tried on Jordon Ibe on the left-hand side as he dances to the line before crossing out into the six-yard box then passed it to Heurelho Gomes to collect it low down.

Troy Deeney did brilliantly inside the box from Odion Ighalo knock-on, chesting down and feeding Sebastian Prodl on the edge of the box, but the play didn’t score after he was been sent to the ground. Roberto Pereyra was been booked for tripping Jack Wilshere.

A successful goal from Bournemouth by Callum Wilson! Such an impressive goal it is. Junior Stanislas takes the initiative, by steals the ball and he pierces forward on the right before his deflected cross finds Callum Wilson’s attack the net through his head beyond Watford goalkeeper Heurelho Gomes.

Callum Wilson finding Junior Stanislas, who wins a corner off but Troy Deeney was able to clear the threat.

The Watford squad’s faith is diminishing. Frustration is covering the Watford’s side as Bournemouth dominating the possessions in the near end first half.

A Quick break from Bournemouth and Callum Wilson pace and power sees him barge into the box. He sets up Andrew Surman instead, who boots it over.

A yellow card was given to Simon Francis for taking down Troy Deeney on the right. Watford has a good chance to score at this moment before the half-time ends.

Etienne Capoue delivery was poor, and Artur Boruc scoops up the ball after several first-half efforts at goal from Nordin Amrabat and Troy Deeney.

Bournemouth takes the kick-off and they keep possession. Their patience paid off and they looking forward to doing the same in the second half.

Etienne Capoue tries a header in the box and unfortunately he misses the target. Watford is getting out strongly in this very moment.

Watford gets another chance from a corner but Troy Deeney can only flick the ball to Sebastian Prodl and takes the shot using his heel and hit the bar.

A wonderful goal from Troy Deeney as he strikes from close range with a right angle after some excellent skill from Nordin Amrabat. What an equaliser shot from Watford.

A yellow card has been booked to Valon Behrami for a hard and late challenge just outside the Watford penalty area. Charlie Daniels will take the free-kick but was not able to score.

A Good save from Artur Boruc denying Troy Deeney’s header from a close range. Nordin Amrabat having difficulties with the right-hand side for the Watford side.

Another goal for Bournemouth and was able to take the lead again the substitution works for the Cherries! Josh King picks it up passed through the two defenders and then smashes the ball low inside the near post, beating Heurelho Gomes.

They’ve equalised the score another worth it substitution from Watford squad! Substitute Isaac Ajayi who steers a header into the far corner from Etienne Capoue’s position.

Nordin Amrabat sends a teasing ball into the six-yard box expecting Isaac Ajayi can get the ball but it is just far for him to reach it.

It is Impossible to tell who will gonna win this match. But at this moment it is Bournemouth who is in the dominating but does not forget on how did Watford equalised the score in the next minutes.

Substitution from Watford. Jack Wilshere missed a shot and was immediate, replaced by Dan Gosling.

Bournemouth will get a free-kick on the edge of the box after a foul has been committed by Sebastian Prodl.

Both squads are exchanging attacks! Junior Stanislas curls the ball up and down but hit the bar for 20 yards.

Another one from Junior Stanislas a shot over from the edge of the box. As Bournemouth trying to hunt for a late winner.

Another attempt from the Watford squad! but it was straight to the Bournemouth goalkeeper Artur Boruc.

A Substitution from Bournemouth! Benik Afobe is coming on in exchange for Callum Wilson and there will be four minutes added time before the game ends!

Jose Holebas is trying to do what he can, as Josh King has a clear sight on goal but fail to score! The crowd is getting crazy! Bournemouth attacking now for the final minutes!

Bournemouth still attacking playing the ball around and Watford for penalty spot. But failed to score. That’s it! The referee blows the final whistle and both sides will be pleased with the result in the end.