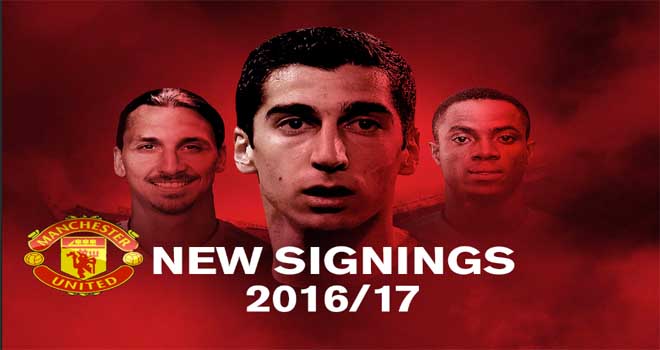 Bailey is an Ivorian professional footballer who plays before at Villareal FC before moving to Manchester United FC. The reason why Mourinho wants Bailey for Manchester United is “Eric is a young central defender with great natural talent. He has progressed well to date and has the potential to become one of the best around. “We look forward to working with him to help nurture that raw talent and fulfill his potential. Eric is at the right club to continue his development.” That is exact words the manager said.

Ibrahimovic is one of the new members of Manchester United this summer, made an immediate impact on his start for Manchester United on Saturday, July 30,2016, scoring an overhead kick goal before the 4minutes mark of the 5-2 pre-season victory against Galatasaray. His arrival at Manchester United made the team captain Wayne Rooney glad, who is already working in developing a strategy on the field with the Swedish striker.

Mkhitaryan is an Armenian footballer and the team captain of Armenian national team and he is Armenian all-time top scorer. According to Jose Mourinho, “Henrik is a very talented footballer who has been in such prolific form for both his club and his country. He is a real team player with great skill, vision and also has a good eye for goal. I am delighted he has chosen to sign for United. I believe he will make an impact on the team very quickly as his style of play is suited to the Premier League. We are all looking forward to working with him.”

According to José Mário dos Santos Mourinho Félix was known as Jose Mourinho the new manager of the Manchester United “ I want to win matches, play well, score goals, don’t concede goals… I’m not humble when I talk about targets. I want everything” For Jose Mourinho, second place is mediocre. His Legendary hunger to succeed has driven his former teams to glory in four different countries, and now it is Manchester United turns to experience that unquenchable desire in his management. “I am going to do my best to be happy and to make the people happy,” Mourinho said.

Mourinho : “I am going to do my best to be happy and to make the people happy”