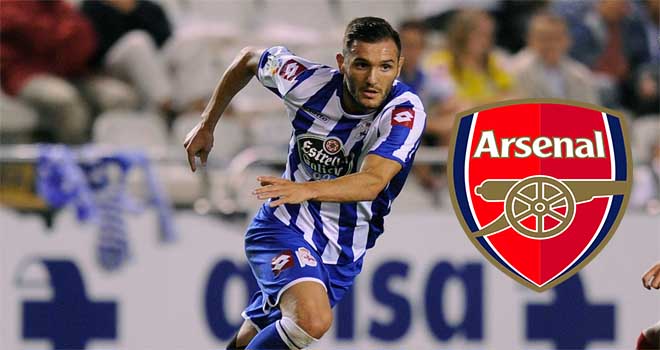 Arsenal is nearly completing the deal with the striker Lucas Perez of Deportivo de La Coruña Football Club with a £17M transfer fee. The Spanish Professional Footballer showed a spectacular individual stats last season scored 17 goals in 37 games. Everton Football Club was not able to close the deal with Lucas before the Arsenal proclaim that they are interested with the 27-year-old Spanish footballer. According to the Arsenal boss Arsene Wenger “We are not scared to spend the money”

Who is Lucas Perez

Lucas is a 27-year old Spanish professional footballer who plays for Deportivo de La Coruña Football Club as a striker rumored to be moving towards Arsenal by Friday. He was been pulled out from the team by Thursday night to fight Real Betis in La Liga that was declared by Deportivo. According to the Deportivo de La Coruña Football Club “The striker, Lucas Perez will not fly to Seville, with permission of the club.”

Lucas started his football career back in 2007 with Athletico Madrid C. He played two seasons in Tercera division. Back in 2009, He signed under Rayo Vallecano helping the reserves to be part of the first team. In the season 2010-11 help out the team in 5 games and scored 1 goal and win against Real Valladolid Football Club. Back on July 5, 2013, Lucas Perez signed a 3-year contract with PAOK Football Club and score his first goal against Skoda Xanthi Football Club. Back on August 12, 2015, He signed a 4-year contract with Deportivo de La Coruña Football Club. He contributed 11 goals out of 15 games.