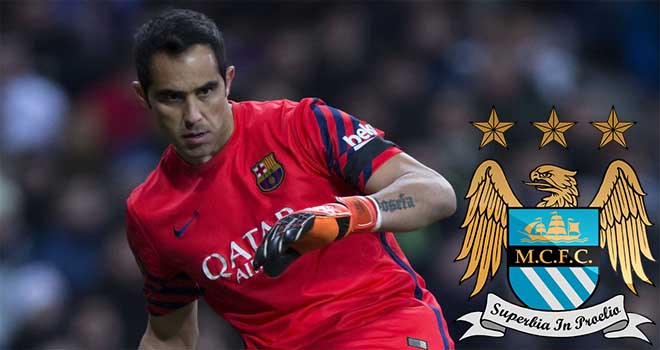 Claudio Bravo arrives at Manchester City to conduct his medical as the first step to complete the transfer closing the deal of £17M. At first, the idea of Claudio Bravo’s transfer was a theory until Thursday but now the 33-year-old Chilean footballer went to Manchester City for the finalization of the said transfer under manager Pep Guardiola. According to Manchester City boss when asked about Bravo’s transfer “I am sorry guys. When the deal is complete or not complete, after I will be open to answering about one player. At the moment, he is not our player.”

Who is Claudio Andrés Bravo Muñoz

Claudio Andrés Bravo Muñoz commonly known as Claudio Bravo is a 33-year-old Chilean Professional Footballer that will play as a goalkeeper of Manchester City but yet to be confirmed and also plays for the Chile National Team in the same Position. His former team Barcelona Football Club tries to increase his salary but the Chilean national declined the offer and made his decision to transfer to Manchester City. Rumored that the transfer will be completed before the Manchester City premier league game against Bucharest.

Bravo started his youth football career with Colo Colo Football Club in Chile. He made his professional debut way back in 2012 and was given the name of Cóndor Chico. In 2006 he won his first title, by saving the ball from a penalty shot in Apertura’s Cup against rival Universidad de Chile.

He started at Real Sociedad by signing a 5-year contract with €1.2M in season 2006-07. He joined Barcelona Football Club on June 18, 2014, with a 4-year contract. He did set a Spanish record in the club for the start of the season without conceding in 754 but was able to lose the streak with the defeat to Real Madrid as Cristiano Ronaldo penalty shot ended up with 1:3.

He made his tournament debut by winning the 2015 FIFA Club World Cup by not allowing the opposing team to score with 3:0 wins against Guangzhou Evergrande Taobao F.C. and Club Atlético River Plate in Japan.